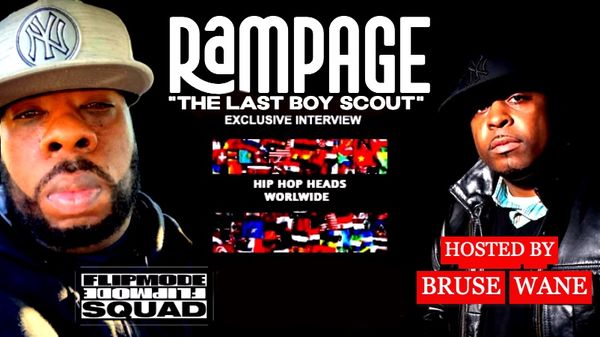 This week Bruse Wane had "Rampage" The Last Boy Scout on his "Live Stream Show". Rampage is a prominent member of the legendary "Flipmode Squad" east coast rap collective. In addition to "Rampage" The Flipmode Squad consist of the other core members Busta Rhymes, Spliff Star and Rah Digga. Rampage is known for his classic Hip Hop song "Wild For The Night" and his classic verse on Craig Mack's Flava in your ear remix, that also featured the "Notorious B.I.G", LL Cool J, Busta Rhymes and vocals by P Diddy. Bruse Wane's Live stream show air 8pm EST every Sunday from the "Hip Hop Heads World Wide FaceBook Group". Watch some portions below, where Rampage talks about being in the studio with during the making of the "Flavor In Your Air Remix". The Full Interview is available at the link